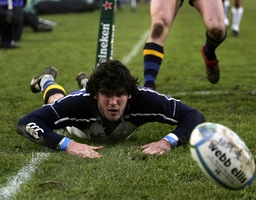 
Following a dramatic finale to the Pool stages of the Heineken Cup, expectations are high that the Six Nations will produce some more thrilling rugby.

In the first game of the championship, Ireland V Italy, the home team’s starting XV includes 13 players that will feature in the Heineken Cup quarter-finals in April. Irish fans will hope that on form players from Leinster and Munster can carry their momentum through to the Six Nations championship.

France travel to Murrayfield to take on Scotland as tournament favourites. France’s starting XV includes nine players from two of France’s Heineken Cup quarter-finalists, Toulouse and Biarritz. The strength and depth of Bernard Laporte’s squad represents a formidable challenge for a Scottish team plagued by injuries.

The heavy weights of this year’s championship have drafted in players who have proven their worth in European rugby. However, their hunger for Heineken Cup glory has to be put to one side as players unite to represent their country in the Six Nations Championship.