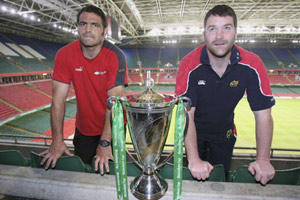 Anthony Foley will lead out Munster as he makes his 76th European appearance. He is supported in the back row by Denis Leamy and David Wallace.


They will come up against arguably the strongest back-row in World rugby. The trio of Serge Betson, Imanol Harinoriquey and Thomas Lievermont have a wealth of European and international experience behind them, and are sure to be up for the battle.

“We are all very excited about playing the final of this great competition,” said Lievremont.

“Munster are an exceptional side with power both in the scrum and behind. We will have to work very hard if we are to overcome such a powerful team.”

Biarritz are at full strength in the backs, in contrast, Munster were unable to call upon former All Black legend Christian Cullen. However Sean Payne makes an admirable replacement, and he will start at full back.

The decision to play the match with the roof open or closed will be taken tomorrow, and is weather dependent.