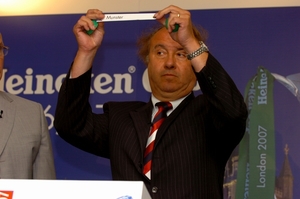 The eight remaining teams in the Heineken Cup know their quarter-final opponents but the potential semi-final lineups will be decided by a draw at Twickenham Stadium tomorrow. - 22/01/2007 10:15

Heineken Cup champions Munster will be up against Cardiff Blues, Bourgoin and former holders Leicester Tigers in Pool Four when they open their defence of European club rugby’s premier title in October.

The draw for the 2006/2007 tournament was made at Twickenham today (Wednesday June 21).
Biarritz Olympique, the French champions and beaten finalists at the Millennium Stadium a month ago, will play Northampton Saints, Overmach Rugby Parma and Border Reivers in Pool Six.

The first round of the tournament will be played on the weekend of 20/21/22 October with the fixtures for the early rounds due to be announced in the middle of July.