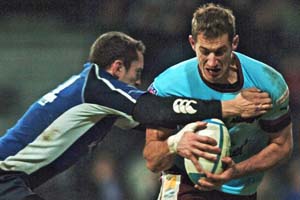 Heineken Cup Pool 2 opponents Leinster and Edinburugh Gunners will clash in Murrayfield on Friday in the province's opening Magners League game of the season. (KO 7:30 pm) - 29/11/2006 12:03

Heineken Cup Pool 2 opponents Leinster and Edinburugh Gunners will clash in Murrayfield on Friday in the province’s opening Magners League game of the season. (KO 7:30 pm)

Leinster welcome Edinburugh to Dublin in Round 2 of the Heineken Cup on the 29th October. This Magners League clash on Friday will give the sides an ideal opportunity to check out their competition ahead of their third meeting in the Heineken Cup.


Kieran Lewis will make his 50th appearance with the Leinster. The 25-year-old has earned 8 Heineken Cup caps so far, 7 of those during the 2005/06 season alone.

Lewis will be partnered by Michael Berne in a game that will see six players making their competitive debuts for the province in the starting XV – Berne, Chris Whitaker, Harry Vermaas, Trevor Hogan, Owen Finegan and Stephen Keogh.

Leinster coach, Micheal Cheika has high hopes for the new members of the Leinster squad:

“The likes of Chris Whitaker, Owen Finegan, Stephen Keogh and Trevor Hogan will bring added organisation into our pack and around the fringes and we’re trying to add a bit more depth and seniority into the team which we maybe lacked last year. For Harry (Vermaas), who has alternated between prop and hooker in our warm-up games, I think that he’s still pretty fresh coming out of South Africa.

“Luke (Fitzgerald) got promoted and progressed past the Academy system and he’s a bundle of energy. He’s strong and is going well in terms of the physical side of things as are Ross McCarron and Richie Leyden – who has come through club football and would have been right up there for selection this week had he not picked up a knock.”