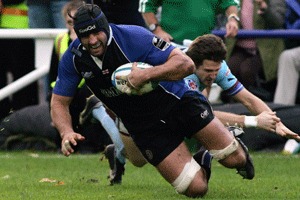 England international second row Danny Grewcock has committed himself to Heineken Cup quarter-finalists Bath Rugby for at least the next three seasons. - 29/11/2006 12:46

England international second row Danny Grewcock has committed himself to Heineken Cup quarter-finalists Bath Rugby for at least the next three seasons.

Grewcock, who has played his club rugby with Bath Rugby since 2001, put pen to paper on a contract that will see him remain at the Rec until at least the end of the 2008-09 season.


Grewcock is currently in the form of his life. The England lock played an influential role in Bath’s achievement of reaching the Heineken Cup quarter-finals for the fourth time. Grewcock was named the Heineken man of the match following the Bath V Glasgow Warriors clash in December, when he gave Bath the perfect start to the second half, bursting clear from 15 metres out to score his second Heineken Cup try.

Bath Rugby’s head coach Brian Ashton expressed his delight at Grewcock’s desire to pledge his future to the club. “I am delighted Danny has secured his immediate and long term future with the club,” said the Lancastrian. “I expect Danny to be a major force in taking Bath Rugby forward in years to come.”

“During the last five years with Bath, I feel that I have significantly improved as a player and that is down to the high standard of coaching that I have received at the club,” said the 33-year-old British Lion.

Bath Rugby are set to face Leicester Tigers in the Heineken Cup quarter-finals, kicking off at 12:30 pm on Saturday 1 April. This is the first time the two former champions will meet in the tournament and a capacity crowd is expected at the Walkers Stadium.