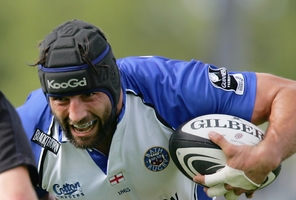 Danny Grewcock will miss the start of Bath Rugby's Heineken Cup campaigns as he recovers from srugery to repair a damaged bicep muscle. - 29/08/2008 09:40

Leicester Tigers hooker George Chuter has been cited for an alleged stamp during the Powergen Cup semi-final while Bath’s Danny Grewcock recieved a caution.

The Citing Commissioner for the Powergen semi-finals Ken Pattinson has referred an alleged stamp by George Chuter on Wasps’ Raphael Ibanez to the Rugby Football Union and the Tigers’ number 2 will appear before a disciplinary panel in London next Tuesday, March 14.


If  the 20 times Heineken Cup capped player was to receive a suspension he could be ruled out of Leicester’s Heineken Cup quarter-final against Bath Rugby at the Walkers Stadium on Saturday, 1 April.

The Citing Commissioner also reviewed the video tape of the match between Bath Rugby and Llanelli Scarlets and cautioned Bath’s Danny Grewcock for reckless use of the boot on Llanelli Scarlets’ Mike Hercus.

No further action will be taken on Grewcock and the World Cup winner will be free for the all English Heineken Cup quarter-final in Leicester.