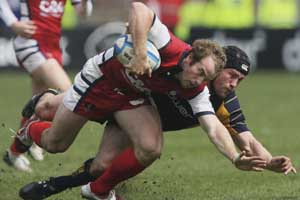 Ospreys bosses are hoping to record a first sell-out of the season when Guinness Premiership leaders Gloucester arrive for a crunch Heineken Cup clash on Saturday evening (KO 5.30pm). - 07/01/2008 11:32

European Challenge Cup champions Gloucester Rugby announced that work on a new 7,500-seater grandstand at Kingsholm will begin immediately ahead of their return to the Heineken Cup.

Gloucester announced the start of the development following the remarkable demand for seated season tickets in both the Buildbase Stand and Grandstand, that were sold out last Friday in a little under a month after going on sale.

The old grandstand and bars will be demolished in early July and a covered stand erected temporarily in its place until the end of the 2006/7 season. All Grandstand ticket holders will be given replacement seats in similar locations as in the existing grandstand and will be closer to the pitch. Other facilities such as toilets, bars, changing rooms and press facilities will also be temporarily relocated.

Demolition will start on July 10 and the foundations and drainage are scheduled to be completed by September, giving time to accommodate any archaeological problems that may occur. The building process will then re-commence at the end of the season and the new stand will be ready for the start of the 2007-8 campaign.

Gloucester chairman Tom Walkinshaw said of the plans: “We appreciate the announcement and the timing of the development has come quickly, particularly after the club have already sold season tickets in huge numbers, but it is essential work starts on this project now.

“Essentially there is no good time to begin work on such a large scale. We need the understanding of our supporters at this time so they can get right behind the project because these improvements will be for them.

“There is a clear need to improve the seating provisions we have at Kingsholm and to update the facilities and with this development we can achieve it.

“It’s an ambitious scheme but one the club needs so it can continue to thrive.”

The new stand will take the capacity at Kingsholm to 17,500 for the start of the 2007/8 season, making it one of the largest capacity rugby grounds in England.