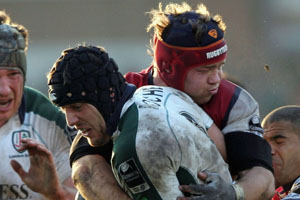 Gloucester Rugby confirmed that tickets for the European Challenge Cup final will go on sale to season ticket holders on Sunday, 7 May from the ticket office at Kingsholm at 10am.

The club’s allocation, of around 5,500 tickets for the Twickenham Stoop showdown, will arrive at Harlequins’ ground by May 4 and will be available to sell individually from Kingsholm from Sunday 7th May.

London Irish, have the same allocation but fewer season ticket holders than Gloucester Rugby, have chosen to sell their tickets in advance from The Stoop and via the Harlequins website.

If there are any tickets remaining, season ticket holders will have the opportunity to buy a ticket for themselves and a friend on Tuesday 9th and Wednesday 10th before any remaining tickets go on general sale on Thursday 11th.

Supporters who are coming to the final Guinness Premiership match of the season against London Wasps on Saturday, May 6 and are unable to make it back to Kingsholm on Sunday are entitled to leave voucher ‘H’ with friends and/or other season ticket holders so they can be exchanged.

The club will not restrict the number of ‘H’ vouchers that supporters may wish to present to the ticket office.

Gloucester are expecting three tiers of prices to be made available and they are: £30 top price, £20 middle price and £15 lowest price with £10 concessions for the middle and lower ranges. Both Gloucester Rugby and London Irish are awaiting confirmation of how many tickets in each category they will receive.

The ticket office will be open on Sunday, May 7 from 10am to 5pm and from 9am to 6.30pm from Monday to Thursday.