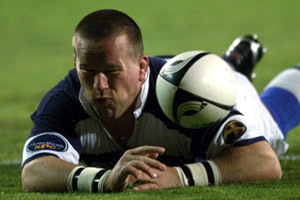 Gloucester have signed Christian Califano on a two-year deal..

Christian Califano, one of the giants of the French Test scrum over the last decade, has joined Gloucester Rugby on a two-year contract.


The 33-year-old tight-head prop, equally at home at loose-head, won 68 caps during an illustrious international career where he made a name for himself as one of the most destructive scrummagers in the business.

Califano, who moves to Kingsholm from French club side Agen, becomes the third international forward recruited by Gloucester for next season, following in the footsteps of Italian duo Marco Bortolami and Carlos Nieto.

“He brings with him a weight of experience that is almost unparalleled in the European game. He has spent the majority of his career in the Heineken Cup and will help us enormously as we test ourselves in club rugby’s most challenging environment next year.

“When you are competing at the highest level you need people in your side who have been there before and proved themselves to be winners – Christian is one of those people and will be a massive influence at the club, both on and off the field.”

It will be Califano’s second stint in the English Premiership following a brief spell with Saracens in 2002/03. He previously spent several years at French side Toulouse and later gained experience of the Southern Hemisphere’s top club competition – the Super 12 – with the Auckland Blues.

“I am very excited about this opportunity,” Califano told www.gloucesterrugby.co.uk.

“The club has massive potential and I am coming to Gloucester because I believe we can win trophies.

“Dean Ryan has a very clear vision for the team and their progress on the field this season in qualifying for the Heineken Cup is a sign of things to come. The training facilities are first class and I can’t wait to experience the famous atmosphere of Kingsholm on match day.

“It will also be nice to join up with my former French team-mates Patrice [Collazo] and Olivier [Azam]. I’m also keen to work closely with Jack Forster and pass on my experience to him. He is a young prop with a big future in the game.”

Califano made his France debut in 1994 against the All Blacks and won the last of his 68 caps in 2003 against Ireland in the Six Nations.