Gloucester plan without Morgan for final 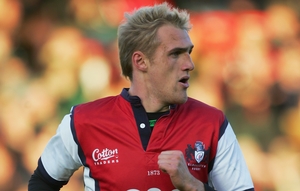 Gloucester will be without fullback Olly Morgan for European final.


The Gloucester full-back was injured minutes into the second half of his side’s 32-37 defeat to London Wasps on Saturday but refused to leave the field despite the obvious pain he was feeling.

He was operated on at Gloucestershire Royal Hospital on Sunday and will now miss potential involvement in the prestigious European Challenge Cup final on Sunday 21 May and Under-21 World Cup action with England or possible tours with the England senior squads this summer.

Head coach Dean Ryan said “It was very brave of him to play on when he was obviously in pretty serious discomfort.

“I think it epitomises the spirit we have within this group of players – Olly was in there right to the end fighting for the cause. That is a hugely impressive characteristic in a young player.

“He has been outstanding for us this season and now we naturally wish him all the very best in his recovery.”

Morgan played in six of Gloucester’s eight European Challenge Cup games and scored a try against Bayonne in January, is expected to be fit to resume pre-season training in July.