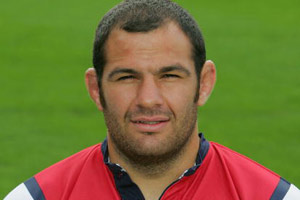 The pair came through a team-run at Kingsholm on Friday morning to solve Gloucester’s prop crisis that, at one stage this week, left them with only one fit prop in 19-year-old Jack Forster.

Forster will move to the bench but there is no place for either Nick Wood (neck) or Terry Sigley, whose appeal against a three-week ban for stamping was upheld at a disciplinary hearing on Thursday night.

“We go into this game having had one session with Gary Powell and Patrice Collazo this week but we are able to fulfil the prop criteria set out by ERC which is the most important thing,” head coach Dean Ryan told www.gloucesterrugby.co.uk

“Collazo has hardly trained all week and Powell has not be able to complete too many sessions either but they are both available and start the game.

“Needless to say it has been a difficult week but it was always going to be tough to include Terry Sigley because it is very late to get him fully prepared for a game following a disciplinary hearing on a Thursday.

“But it was a decision that will help in the long-term with some very important Premiership games coming up.”

The rest of the pack remains identical to the one that started last Saturday, which means Jonathan Pendlebury and Alex Brown start at lock with Peter Buxton, who will skipper the side, Andy Hazell and James Forrester in the back row.

But in the backs, Ryan has made a number of changes. There is a double switch in the half-back position where Peter Richards partners England Under-21 star Ryan Lamb, who starts in place of Ludovic Mercier.

Mike Tindall returns following a back complaint in a centre combination that partners the England man with Anthony Allen. That means James Simpson-Daniel moves to the wing in place of James Bailey and Olly Morgan returns at full-back following an ankle injury.

“I am excited about the options this line-up gives us,” Ryan added. “We have a couple of key individuals back from injury in Mike Tindall and Peter Richards and I am also excited about the variations Lamb can give us.

“We have experienced a great deal this week but we are all looking ahead with great anticipation to this game.”