Gaffney takes over at Saracens 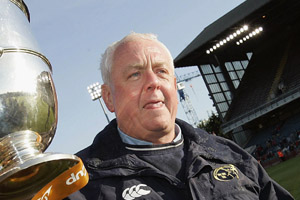 Saracens coach Alan Gaffney is looking forward to facing Ospreys twice in a fortnight with European and Anglo-Welsh honour at stake - with the tantalising possibility of facing his former team Munster in the Heineken Cup semi-finals. - 22/01/2008 16:52

Saracens are delighted to announce that Alan Gaffney has been appointed in the role of Director of Rugby.

Gaffney brings more than 20 years coaching experience to Saracens including successful spells with both Munster and Leinster.


During his three-year spell as Director of Rugby with Munster, he helped the club twice reach the semi-finals of the Heineken Cup along with winning the Celtic League and Cup.

Alan’s role for the final four weeks of the season will be one of an observer, and he will not be playing a direct role with regard to playing matters for the remaining games. His focus will be on pre-season planning for 06/07, completing the recruitment process and putting in place staff structures for next season.

Eddie Jones will continue with Saracens in his current role as a coaching consultant and ‘Acting Director of Rugby’ until the end of the season, working closely with Mike Ford and the rest of the coaching staff in preparing the team for the final three games.

Gaffney left Munster to join Australia as an Assistant Coach at the end of last season and his coaching career has also seen him spend two years at Leinster and also with the New South Wales Waratahs.