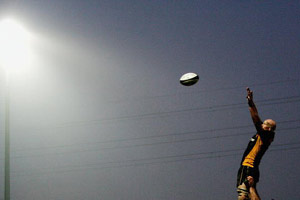 Worcester coach Mike Ruddock is revelling in the club's success reaching the Challenge Cup final for the first time after beating Newcastle in the semis. Watch the interview here. - 26/04/2008 01:10

Tongan flanker Johnny Tuamoheloa went from zero to hero as the Worcester Warriors cemented their place in the European Challenge Cup quarter-finals on Friday night.

Tuamoheloa was sin-binned at the end of the first half against Montpellier at Stade Sabathe as the home side took an 18-10 lead into the break, but scored a crucial try as the English club hit back to win the final Pool 5 match 31-21.


Montpellier led 18-10 at the break through a penalty try and a five-pointer from fullback David Bortolussi, but the Warriors hit back in a bad-tempered second spell.

Tuamoheloa was the first man over, followed by centre Thomas Lombard and replacement backrower Saosi Vaili as Worcester secured their spot in the next round.

In the other Pool 5 match, Connacht travelled to Italian club Amatori Catania needing five points, but returned with only two after the 28-24 loss.

The Irishmen were struggling at halftime. Tries to winger Ted Robinson and backrower Colm Rigney gave them a handy lead, but the home side hit back through the boot of Barry Irving, who kicked two penalty goals and converted winger Mauro Commuzzi’s try to give the home side a surprise 13-12 lead at the break.

The Italians went further ahead with another try to Commuzzi, but backrower Matt Lacey’s five-pointer from a close-range lineout made it 20-19 on the hour mark.

Catania edged ahead with a third try, through backrower Alejandro Krancz, and Lacey’s second effort was of no avail as Irving slotted a last-minute goal for the four-minute win. Connacht must now hope that Newcastle win in Brive and Bristol lose to Narbonne on Saturday to give them a quarter-final spot as one of the best runners-up.

Northampton needed five points from their trip to Viadana on Friday night to ensure quarter-final qualification, but “adverse weather conditions” at Stadio Luigi Zaffanella mean the Saints have to wait until Saturday to play the match.
Officials are holding a pitch inspection at 8.30am.