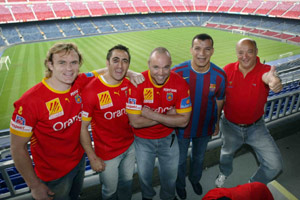 Perpignan prop Freshwater caught the tail-end of Hayes and Ireland’s whirlwind finish to their Six Nations at Twickenham when he came on for the final 16 minutes as a replacement for Andrew Sheridan.

But with Munster’s Heineken Cup quarter-final clash with the Catalans fast approaching, Freshwater revealed his Lion of an opponent was already eyeing up a rematch at Lansdowne Road this weekend.

“The first thing he said to me after the game was ‘I’ll see you in two weeks’, so there’s obviously going to be no let up for me!” said Freshwater.

“But I’m looking forward to it – I’ll be up against exactly the same front row so it will certainly be interesting for me. I guess it’s a chance of some quick revenge!”

Freshwater has been one of the mainstays of the Perpignan pack in Europe this season, starting five of their six Pool matches at loose head prop. A veteran of three Heineken Cup finals with Leicester Tigers, he already knows a thing or two about Munster.

Having marked his European debut with a five minute cameo appearance as a temporary replacement for Darren Garforth in the 1997 cup final defeat by Brive at the old Cardiff Arms Park, he picked up a winners medal in Paris in 2001 when Leicester beat Stade Francais.

That time he remained on the bench, but he at least got 10 minutes against Hayes the next year when he replaced Graham Rowntree in the closing stages of the Tigers’ 15-9 triumph at the Millennium Stadium.

But the three-times capped New Zealand-born Englishman, who these days plies his club trade in France, knows that it is going to take a mighty effort at Lansdowne Road on Saturday to stay on course for a third Heineken Cup final trip to Cardiff.

“Munster is going to be a huge game for us at a big ground, so it was good to get some solid preparation under our belts by taking a trip to the Nou Camp,” said Freshwater, who joined Perpignan skipper Bernard Goutta, Manny Edmonds and Scott Robertson on a trip to Barcelona last week.

“We know Lansdowne Road is an impressive place, but the Nou Camp is another ball game altogether – quite literally.

“We had quite a big support in the game against the Blues in Cardiff. We might be outnumbered in Dublin, but I’m sure our fans will be there in force and making a lot of noise.”

Perpignan have already played two games at Lansdowne Road, beating Leinster there in the 2003 semi-final 21-14 before going down 22-17 to Toulouse in the final in Dublin, and Freshwater and his team mates are hoping it will be third time lucky today to keep the Catalan challenge alive in the tournament.

“Heineken Cup games are Test level games as far as intensity goes. I’ve not played many Test matches, but from the ones I have been involved in I can’t tell the difference between games I’ve played in the Heineken Cup,” said Freshwater.

“I’ve been on the bench in a few Heineken finals with Leicester Tigers, played some huge, huge games such as semi-finals and quarter finals and they have all had the same intensity as you get in the international arena.

“In fact, it’s almost even more intimate in the Heineken Cup because you’re with your friends, the players you train and play with day in day out, and you all know what you’ve been through together to get to that stage. That’s why it means so much to win the Heineken Cup.

“It has been great for me to get a bit of Six Nations action with England this season, although obviously we were disappointed not to get a result against Ireland at Twickenham – but it’s all Test rugby experience.

“It has been a bit funny jumping from the two camps, England at international level and then Perpignan at club level. The French and English games have different approaches – not better or worse, just different.

“Maybe at times in England there’s an argument that says things can be over coached, especially with the younger age-groups. In Perpignan it’s just about playing with your heads up and seeing what happens, what’s on.

“In fact, we hardly have any structure at Perpignan. We have a couple of line-out calls and we know which side we’re going to play and that’s about it. We’d like a little bit more consistency in our game. I guess you get that  through a good structure, but sometimes this approach works for us and sometimes it doesn’t.

“We just love to go out there and play. We’re a good group of players and we play for each other – that’s so important to us.”

Perpignan warmed-up for their clash with Munster by beating Toulouse at home last weekend and whoever wins on Saturday will move ahead in the series. The two have met four times before, with the results always going with the home side, although Perpignan have outscored their Irish rivals by 14 tries to eight.