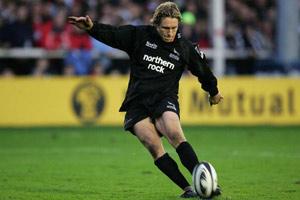 The Falcons did see their six-match unbeaten run halted when they were beaten 21-6 by London Wasps in the Guinness Premiership but director of rugby Rob Andrew, said: “We are not despondent and everyone will be right up for what is effectively a local derby against Borders on Sunday.

“We’re hoping to get a few back from injury for next weekend, which will be a real boost, with Tom May and Hall Charlton close and Anthony Elliott not far behind.

“Then there’s the ongoing Jonny Wilkinson saga, which I am saying nothing on now, after learning my lesson in the last two weeks saying he may be fit.

“We will just take a look at him this week and see where we are, but I keep jinxing him by saying he might come back every week, so I’m finally going to shut up about it now.

“Jonny adds an awful lot of edge and attacking spark to a side, but I’m not prepared to make any comment whatsoever on when he might be back, because I keep putting my foot in my mouth!

“We need to reflect on this result during the week, but within that there are areas of our game where we are making massive strides – it’s just a case of putting the package together.”

The Falcons have swooped for 35 tries in their four European Challenge Cup victories so far in beating 1997 Heineken Cup champions Brive 51-19, doing the double over L’Aquila and winning 26-11 north of the border when they travelled to Netherdale for their Round 2 clash with Border Reivers.

“Our scrum was outstanding again against Wasps, and the line-out work was good throughout, but Wasps just edged us in the open-field stuff,” said Andrew. “It was a foul and filthy day, and it was that loose play which determined the winner.

“With our set piece going as well as it did, perhaps we needed the Dave Walders of this world to get us down there and pressurise them in more of a set-piece game, but neither Toby Flood nor Matt Burke, in fairness, played that territorial game.

“Toby has done really well this season and is a very talented young player, but the type of game Dave plays may have put us in parts of the field where we could apply more pressure, but we didn’t exert enough of that pressure on them.

“I said before Christmas that I expected us to have a good second half to the season and, despite this disappointing result, nothing has suggested to me that it isn’t going to be the case.
“I’m a bit of a statto at times, and I think the Wasps game is the first time this season where we haven’t scored a try.

“That was down to a combination of things. Firstly the conditions, secondly the Wasps defence and then our own shortcomings with the ball in hand, where we failed to take control and dictate the play as much as we should have.

“We lost a little bit of our spark behind the scrum, and getting Jonny back would be a boost because he really drives the play. Dave and Toby are both very good players, but Dave tends to be more of a tactical kicker, whereas Toby is just finding his feet at this level.”