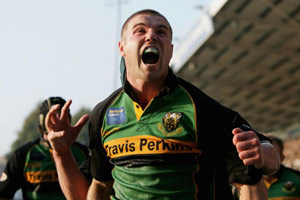 Sale Sharks will be wary of a former Saint turning sinner against them when they clash with Brive in the opening European Challenge Cup quarter-final under the Edgeley Park floodlights on Friday night. - 08/04/2008 10:04

Newcastle Falcons are on target for a home quarter-final after their European Challenge Cup victory over Border Reivers on Sunday.

The Falcons won an entertaining match 47-20 at Kingston Park and go into next weekend’s final Pool match at Brive with an impressive 24 points from a possible 25. They are guaranteed a spot in the playoffs, but will want a win in France to secure a home tie.

The home side didn’t have things all their way against Reivers, with tries to Stuart Moffat and Andy Miller giving the Scottish side a surprise 20-19 lead at halftime.

But Australian veteran Matt Burke scored in the first move of the second half and lock Andy Buist gave the Falcons some breathing space with their fifth try of the match.

Ben Cohen scored a brace as the Northampton Saints continued their march toward the quarter-finals of the European Challenge Cup with a 45-8 win over Bristol.

The Saints moved ahead of Bristol in Pool 1 with a 45-8 win over their English rivals in front of a Challenge Cup-record crowd of 12,227 at Franklin’s Gardens.

New Zealanders were to the fore, with backrower Sam Harding scoring a try double in the opening 10 minutes to propel the Saints to a comfortable victory ahead of next weekend’s final Pool match against Viadana in Italy.


Bristol lock Mariano Sambucetti scored a last-minute consolation for the visitors. London Irish sneaked home 19-11 against Rugby Parma in Italy, and can secure a valuable home quarter-final with a win over Pau next weekend.

Gloucester ground out a 27-13 victory over a winless Bucuresti to ensure quarter-final qualification and Ryan paid tribute to the home side.

After Gloucester’s 106-3 mauling of the Romanians in the first-leg match at Kingsholm, visiting fans were left scratching their heads as their side led only 5-0 at halftime.

South African backrower Jake Boer was the only man to trouble the scorers in the first spell, scoring his fifth try in three European matches.

Gloucester moved up a gear in the second half with tries to hooker Rob Elloway and replacement scrum-half Peter Richards, before a late penalty try ensured a bonus point. The Cherry and Whites are guaranteed a Cup quarter-final, with next weekend’s final Pool 3 match against Bayonne at Kingsholm deciding who tops the pool and secures home advantage in the playoffs.

Worcester retained the top spot in Pool 5 with a comfortable 44-8 win over Amatori Catania at Sixways Stadium. The home side eased to a 25-0 lead on the back of tries to centre Dale Rasmussen and backrowers Johnny Tuamoheloa and Drew Hickey, and bagged a try bonus point in the opening exchanges of the second half.

Catania stemmed the flow midway through the second spell before conceding a last-minute try to former England scrum-half Andy Gomarsall. In Galway, Connacht kept the pressure on Worcester in Pool 5 with an impressive 43-10 win over Montpellier.

The home side led only 7-3 at the break, but moved up several gears in the second spell to run away things. Backrower Matthew Lacey and centre Keith Matthews helped themselves to try doubles to secure a valuable victory.

Bayonne ran in 10 tries, including three to winger Benjamin Lhande. Pau tonight did the British teams competing in the European Challenge Cup a major helping hand after inflicting a 36-12 defeat on French rivals Agen.

Agen had been pressing for one of the three best runners-up spots in the quarter-finals behind runaway Pool Two leaders London Irish but their loss opens the door for the likes of Bristol, Connacht and Border Reivers.

Two tries by centre Gregory Puyo and one apiece from Romain Terrain and Patrick Tabacco ensured only a second win for Pau at Stade Municipal du Hameau.

Meanwhile a hat-trick from hooker Lei Tomiki ensured Narbonne took maximum points against Viadana to keep the pressure on Bristol in Pool One. French veteran Franck Tournaire also scored in the 29-14 win.