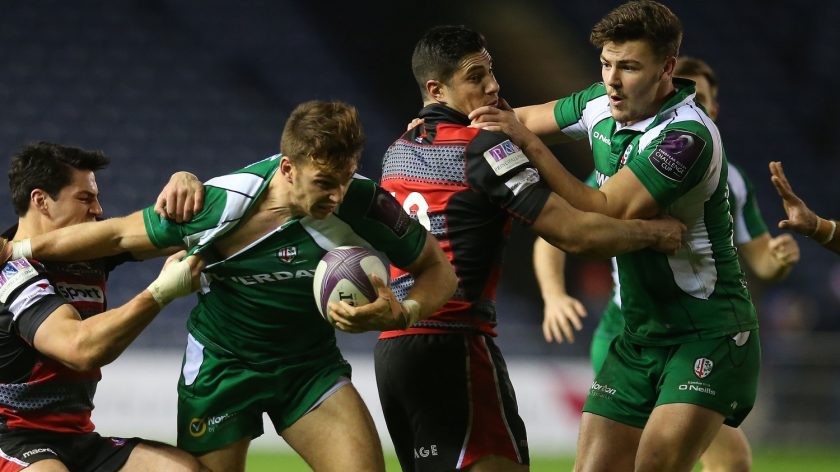 London Irish director of rugby Nick Kennedy cannot wait to return to European Rugby action after a year's absence following their relegation to the English Championship.  - 12/07/2017 12:30

London Irish breezed into the European Challenge Cup quarter-finals against by hammering Pau at the Madejski Stadium.


The Exiles went into the match knowing a win would guarantee a home quarter-final in the first weekend of April, and the match was over as a contest after barely 10 minutes. The home pack destroyed the French scrum and dominated the lineout as they scored tries at will – including eight in the first half to take a 56-0 lead at the break.

Winger Delon Armitage secured the bonus point inside half an hour, and things began to get embarrassing when fellow winger Topsy Ojo bagged a quick-fire hat-trick – especially with outside-half Riki Flutey adding conversions from everywhere.

At Kingsoholm, Gloucester secured a crucial top-two ranking in the quarter-finals with a workmanlike win over Bayonne.

Prop Gary Powell bagged a rare try double as the Cherry and Whites cruised to a
32-7 lead before letting in two late tries in front of an 8,000-strong crowd.

Front-rowers dominated the early scoring, with Powell rumbling over the try-line in the ninth minute, and young opposite number Aretz Iguiniz returning the favour moments later.

Bayonne’s veteran Test centre Richard Dourthe was yellow-carded midway through the first half for a late tackle on Mercier, and Powell completed a memorable double as Dourthe cooled his heels.

Fullback Olly Morgan put the result beyond doubt with a clever five-pointer and England international Mike Tindall secured the bonus point with a try on the hour mark.

Barely 900 fans turned up to watch as Border Reivers ended their European campaign with an entertaining five-try victory over Italian minnows L’Aquila.

The Italians opened the scoring with an Alberto di Bernardo penalty goal, but were reeling after the Reivers ran in three quick-fire tries. Stuart Moffat, Calum MacRae and Nikki Walker all crossed, but L’Aquila stemmed the flow through centre Nicolas Canavasio and Test prop Andrea Lo Cicero and Reivers had a game on their hands with a 22-15 lead at halftime.

Young fly-half James King and replacement Charlie Hore edged the home side further ahead with goals at regular intervals, and Reivers sealed the win with late tries to props Paul Thomson and Geoff Cross.

The Falcons finished the Pool stages unbeaten, but had to dig deep against a tough French outfit who went all out to make the Cup quarter-finals.

Falcons director of rugby Rob Andrew was a happy man after the match.

“We had a few problems at the breakdown and we were frustrated at halftime, but I think we sorted things out in the second spell,” he said. “Our scrum was fantastic and we won 100 percent of our lineouts. We closed out a match against a French team in France and that’s an outstanding feat.”

The boot of Australian veteran Matt Burke kept the Falcons in the match in the opening spell, with his four penalty goals cancelling out a try to Brive’s Test centre Ludovic Valbon.

Brive fought back in the third quarter, but late tries to winger James Hoyle and Ward clinched the win and a home quarter-final.

In two other matches between sides who were already out of quarter-final contention, Bucuresti secured an historic win in Europe with a 23-17 result at Toulon, and Agen comfortably beat Rugby Parma 33-17.

Bucuresti and Toulon were tied at 10-all at halftime, but tries to centre Catalin Fercu and backrower Daniel Carpo sealed the victory.

Agen raced to a 26-10 lead at halftime against the Italian club were never in danger.

In Sunday’s match, Bristol were beaten 18-24 at the Memorial Stadium.