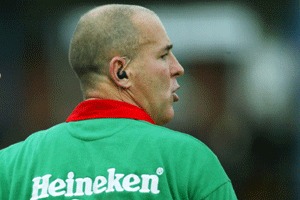 …between Gloucester Rugby and London Irish at the Twickenham Stoop on Sunday, 21 May (12.15 pm).


This will be his third European Challenge Cup final appointment as he controlled the 2001 clash between NEC Harlequins and Narbonne and the NEC Harlequins’ 2004 meeting with Clermont Auvergne, both won by ‘Quins and both at the Madejski Stadium in Reading.

Whitehouse has also controlled four Heineken Cup quarter-final matches – including this season’s clash between Munster and Perpignan at Lansdowne Road.

His touch judges at the Twickenham Stoop will be Nigel Owens and Hugh Watkins.