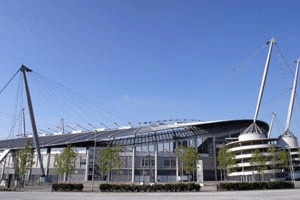 The City of Manchester Stadium could be the next new venue to stage Heineken Cup action - if Sale Sharks beat Biarritz Olympique in the quarter-finals. - 29/11/2006 12:47

The City of Manchester Stadium could be the next new venue to stage Heineken Cup action – if Sale Sharks beat Biarritz Olympique in the quarter-finals.

The Board of ERC, the tournament organisers, today confirmed the four potential venues for the semi-finals, to be held on the weekend of 22 / 23 April, en route to the 11th final being staged at the Millennium Stadium, Cardiff, on Saturday, 20 May (3.00 pm)

If Biarritz Olympique qualify for the semi-finals their match against the winners of the clash between Leicester Tigers and Bath Rugby will be played at Estadio Anoeta, San Sebastian, and if Sale Sharks win it will be an all-England clash at the City of Manchester Stadium.

If Toulouse qualify for the semi-finals their match, against the winners of the quarter-final between Munster and Perpignan, will be at Le Stadium, Toulouse, and if Leinster win the semi-final will be played at Lansdowne Road, Dublin.


The draw for the semi-finals made in Cardiff following the Pool stages gave the winners of Biarritz Olympique v Sale Sharks and Toulouse v Leinster “home” semi-finals with the matches to be played at neutral venues in their home country. The ERC Board have approved San Sebastian in Spain as a suitable semi-final venue.

A Sale Sharks victory would see the 47,500 capacity City of Manchester Stadium become the 76th venue to host a Heineken Cup match.  The stadium, which is home to English football Premiership side Manchester City, was constructed as the athletics stadium for the 2002 Commonwealth Games.

The venues, dates and kick-off times of the semi-finals will be confirmed on Monday, 3 April.