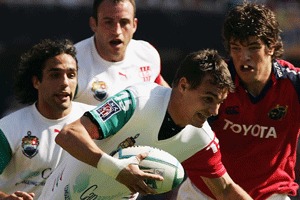 ERC, Heineken Cup organisers, have confirmed that Munster will receive an additional allocation of close to 3,000 tickets for the much anticipated Heineken Cup final.

The Millennium Stadium will be packed to the rafters when Cardiff hosts European rugby’s showpiece final for the fourth occasion.

Tickets for the Cardiff 06 Heineken Cup final have been on sale since May 2005 through ticketmaster and WRU channels and around 48,000 tickets were snapped up by fans prior to the Heineken Cup semi-finals in April, with an estimated 18,000 of these going to Irish based fans.

After the semi-finals Biarritz Olympique and Munster both received an allocation of 7,650 tickets which are being distributed by the two teams.

The second allocation of 3000 tickets to Munster Rugby comes after a final reconciliation of all stakeholder allocations and includes 600 extra seats which are being especially installed in the Millennium Stadium to meet demand for the final.  The tickets will be distributed by Munster Rugby.

Total Number of Tickets Available for distribution is 73,300