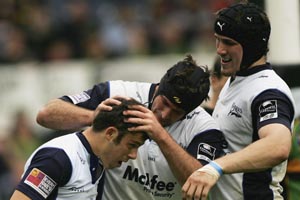 Daniel Larrechea returns to Edgeley Park on Thursday night with the Bayonne party for the Round 4 return leg against Sale Sharks admitting the star-studded Sharks are firmly in control of the group. - 13/12/2007 10:52

Six English teams have secured their place in the 2006/2007 Heineken Cup.

This season’s Heineken Cup quarter-finalists and double European Challenge Cup champions Sale Sharks are in poll position to secure England’s top seeding in the 2006/2007 Heineken Cup, having finished top of the table and securing a home semi-final in the Guinness Premiership.

2004 Heineken Cup champions, London Wasps secured qualification for next season’s Heineken Cup when they won the Powergen Cup last month.  As fourth place finishers in the Premiership table they will play Sale in the semi-final and can also win top English see for Europe.

European Challenge Cup finalists Gloucester Rugby will play in next season’s Heineken Cup having finished fifth place ahead Northampton Saints who secured the sixth and final English place for the 2006/2007 Heineken Cup season.

The draw for the 2006/2007 Heineken Cup pools will be made when all 24 teams are confirmed and the top seed from each country is determined.