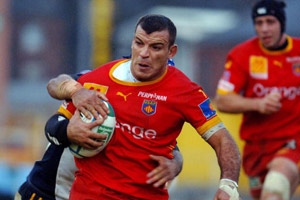 Bernard Goutta and his Perpignan team-mates will have to break new ground if they are to clinch a place in the Heineken Cup semi-finals... - 29/11/2006 12:53

They go into their Saturday evening showdown with Munster at Lansdowne Road aware they have never beaten Munster on Irish soil – but glad to be avoiding the intimidating atmosphere of Thomond Park.

“We have played Munster four times in the Heineken Cup and won at home and lost away,” said former French flanker Goutta. “As for home advantage, although we have never beaten Munster away, there are factors which make this year’s game different.

“Firstly, we have never met them in the knock-out stages – it has always been during the Pool matches where the pressure and expectation away from home is not the same as in the quarter-finals. The fact that Munster are playing in Dublin, and not in the fortress of Thomond Park, also makes it psychologically easier for us, knowing that in a way this is an away game for them too.

“And there are massive similarities between the playing styles of the teams. We are both very physical teams with great strength in the forwards and the quarter-final will be a really physical battle with neither team likely to shy away from contact.

“But Munster have more experience than us in the knock-out stages. They have done well almost every year, and deservedly so, and I think the thing that has held Munster back from winning the tournament is that, in the years when their team has been strongest, it has been the number of away semi-finals they have had to play.

“To get to the final in 2002, when they had to play both their quarter and semi-final in France, was an amazing achievement. It’s very difficult to win these games, in particular the matches against Toulouse in 2003 and against Wasps in 2004.

“In both matches Munster stepped up to the plate and put in an amazing performance but came away empty-handed. To us, Munster as a team and as a club represents everything that is best about Ireland and Irish rugby.

“However, what is most impressive is the quality and consistency of their team. They don’t bring in a load of new players every season in the way some other clubs do and the team gets better and better. Although this year, they have brought in a couple of new guys in the backs, they have kept the same base and high standard of players.

“Obviously we know Mick O’Driscoll well. He is a high quality player who was very successful at Perpignan, not just because of his performances on the pitch but in the way that he integrated himself into the team so quickly.

“I’m really looking forward to the game in Ireland because I think the Irish – and particularly the Munster supporters – understand the culture of our club and our supporters. We played two games at Lansdowne Road in 2003, the final against Toulouse, which sadly we lost, and the semi-final against Leinster that we won.

“The Irish and Catalans got on very well and we had a great time, as did our supporters. The Irish gave us a fantastic welcome and one of the best things about the Heineken Cup is that outside the rugby we are able to share and express our different cultures.

“Although the priority is obviously to win, behind this team is the Catalan region and we feel we represent these people in the Heineken Cup in a way that we are not able to do in the Top 14. When we put on the “Sang et or” (Blood and Gold) shirt we are very aware that we are their representatives in Europe.”