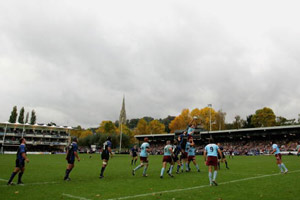 Bath Rugby fans are getting excited about their side’s unbeaten start to the Heineken Cup – but bookmakers seem to be ignoring it.
If the 1998 champions continue their winning ways, a home quarter-final is guaranteed, but they are still 10-1 to win the coveted trophy, with six sides ahead of them in the market.

Triple champions Toulouse are warm favourites at 7-4 (a £27.50 return for a £10 wager), with the Guinness Premiership-topping Sale Sharks second favourites at 4-1. Next are Biarritz Olympique (9-2), double champions Leicester Tigers (7-1), Stade Français Paris (7-1), Perpignan (9-1) and Bath. Cardiff Blues are the first club from outside England and France in the market and are rated 25-1 to win the final in their home town.

With Toulouse, Perpignan, Stade Français Paris and Biarritz Olympique all jockeying for position ahead of the quarter-finals, France’s proud tournament play-off record looks set to continue. Since quarter-finals were introduced to the competition in 1996-97, France has been represented by at least three clubs in every final eight. They had four out of eight in 1998-99 and have supplied five of the past six finalists (Perpignan and Toulouse in 2002-03, Toulouse in 2003-04 and Toulouse and Stade last season). France can boast four Cup final wins (Toulouse 95-96, 02-03, 04-05; Brive 96-97) and six losing finals.

English side Sale Sharks are on target to join a select list of clubs to win all six Pool matches in the Heineken Cup, while Bath Rugby are looking at joining an even more select list of sides to have achieved the feat twice.
Leinster managed six wins in 2002-03 and last season, while London Wasps (97-98) and Bath Rugby (01-02) have also managed it. Leicester Tigers (five wins and a draw) were undefeated in the 2002-03 Pool rounds. But, perhaps worringly for Sale and Bath fans, none of those teams went on to make that season’s Heineken Cup final.

The 12 matches in Round 4 produced a record 20 yellow cards, with players from 14 different sides earning 10-minute spells on the sideline. Four players saw yellow in both the Cardiff Blues v Rugby Calvisano and Bourgoin v Leinster matches. Rugby Calvisano now have six yellow cards in four matches, while Leeds Tykes, Ospreys and Toulouse are the only sides to escape punishment after four rounds. Leicester Tigers lock Ben Kay and Bourgoin winger Jean-Francois Coux are the only players to be shown two yellow cards this season.

Ulster marksman David Humphreys’ next successful score – be it a try or any kick at goal – will take him past 500 Heineken Cup points. Humphreys, who goes into the fifth-round match against Biarritz Olympique sitting on 499 points, will be the fifth player to achieve the feat. Compatriot and all-time leading Cup points-scorer Ronan O’Gara needs a penalty goal against Castres Olympique to reach 700 points while Llanelli Scarlets’ threequarter Dafydd James needs one try to become the first player in the tournament history to score 25 Heineken Cup tries.