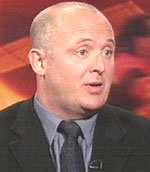 From the opening weekend early in October 2005 all the way through to the final in Cardiff in May 2006, Dewi will choose his Try, Players, Team, Moment and Villain of the week.
TRY OF THE WEEK
Simon Webster – EDINBURGH GUNNERS v London Wasps
There were some sensational tries scored by numerous other teams, Toulouse for example, but my try of the week is Webster’s try against London Wasps because it was a match-winning score.


Two years ago they beat Toulouse and again Edinburgh have proved that they can beat the big boys. They did it by frustrating Wasps and then turning on the style. It was very well worked try with Webster coming off the bench to score it.

TEAM OF THE WEEK
TOULOUSE v Llanelli Scarlets
It has to be Toulouse, they took rugby to another planet. In the northern hemisphere the Welsh moved it up to a certain extent but I just think Toulouse play a different type of game and it is the way that rugby should be played.

I know some times they are bad but when they are good they are mouth-wateringly brilliant. From one to 15, in fact one to 22 when they come on, they just know how to play the game. They play with power and incredible passion but they just have the intensity and skill levels that some sides in the Guinness Premiership can dream about. They were simply brilliant.

PLAYER OF THE WEEK
Sebastien Chabal – SALE SHARKS v Munster
Everyone will say this, but I think Chabal was the player of the week. With so much written about him, he keeps performing week in, week out at the highest level. He is the heart beat of that side and it is nice to talk about Sale’s forwards, rather than their backs, who are used to being lauded.

If they are going to go further then Sale are going to need a pack of forwards and if this guy keeps injury-free, he is going to be a handful for anyone. He made the big tackle of substitute prop Federico Pucciariello, turned the ball over, (Charlie) Hodgson kicked it down there and (Jason) Robinson scored the decisive try.

VILLAIN OF THE WEEK
Mark van Gisbergen – WASPS v Edinburgh Gunners
There weren’t many to pick from this weekend, and it is critical to pull him out, but Mark van Gisbergen’s decision not to clear the ball in injury time against Edinburgh, with hindsight, looks a bad decision.

He did make an exhilarating break earlier on but that was a critical decision and really he should have hoofed that ball down the park. That is the guidline we are going on and if he is going to be picked for England, he can’t make those mistakes playing at international level.

He is a great, fantastic player with a bright future and hopefully that is something he will learn from.

MOMENT OF THE WEEK
Clement Poitrenaud – TOULOUSE v Llanelli.
Clement Poitrenaud has shaken off the shackles of Rob Howley’s winning try for Wasps in the 2003 Heineken Cup final, has come back stronger and his break through the middle for Gareth Thomas’ try against Llanelli was brilliant.

Making the break intitially was a turbo-charged change of pace, it was electrifying and his strength took him through the middle of Llanelli. The quick offload enabled Florian Fritz to put Thomas into the right corner. It typified everything about a good back playing in a very good team. It was exceptional skill.