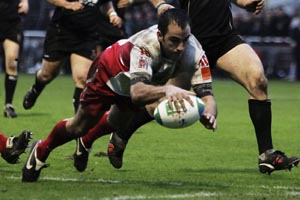 Biarritz Olympique joint-coach Jacques Delmas confirmed that he has extended his contract with the French champions for another four years. - 29/11/2006 12:38

Biarritz Olympique joint-coach Jacques Delmas confirmed that he has extended his contract with the French champions for another four years.

Delmas and Patrice Lagisquet have trained the Biarritz Olympique team for the past two seasons and in 2005 led the club to the Heineken Cup semi-finals and helped them win the Top 14 championship for the first time in three years.


Biarritz Olympique have reported that Delmas turned down offers from many clubs this season including ASM Clermont-Auvergne, where he was offered the position of head-coach.

The decision to opt for a long-term contract with French champions Biarritz was a combination of a number of factors for the coach.

“The Biarritz management offered to extend my deal and I took it as a sign of trust,” said forwards coach, Delmas.

The mutual respect and total trust between Delmas and Lagisquet reinforced his decision to stay with the Pays Basque club. The coaches have set their sights on the premier European club rugby trophy, the Heineken Cup.

“The club has always had ambitions to be successful at the highest level – especially at a European level.”

Biarritz are leading the Top 14 table by five points over Toulouse and will face Sale Sharks in the Heineken Cup’s quarter-finals on 1 April in the impressive setting of San Sebastian, Spain.