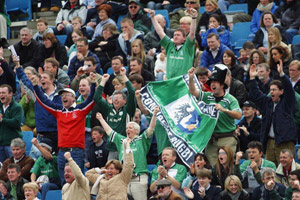 Connacht are aiming to make it through to the European Challenge Cup knock-out stages for the fourth straight season - but accept they are going to have to do it the hard way if they are to go to a third successive semi-final. - 29/11/2006 12:18

Connacht are aiming to make it through to the European Challenge Cup knock-out stages for the fourth straight season – but accept they are going to have to do it the hard way if they are to go to a third successive semi-final.

The Irish province travel to Amatori Catania for their Friday night Pool 5 showdown one point behind group leaders Worcester Warriors and are resigned to possibly having to travel for an away quarter-final.

“We know what we have to do – first and foremost we have to win the match and get the four points,” said coach Michael Bradley.

“And it would take an absolutely amazing set of events for us to get a home quarter-final and, as long as we get the result against Catania and if all things go to form, then 22 points should be enough for one of the three best runners-up places and an away quarter-final.

“If we get a try bonus point well and good but the win is the most important thing.

“But, make no mistake, we are not underestimating Catania in any way whatsoever. They have been playing well – they won at Montpellier and only lost by five points at home to Worcester.

“And when we played them at home in Round 1 they scored two good tries against us. I would go so far as to say one of them was probably one of the best scored at the ground all season, it was wonderfully constructed.

“They have got some nice footballers and work hard for each other so breaking down that team spirit is something we will have to work on.

“It would be quite an achievement if we do qualify for the knock-out stages for a fourth time but we really want to compete in a European Challenge Cup final – although we always seem to come up against the eventual winner before that stage!”