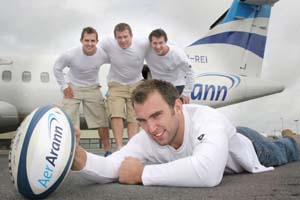 Connacht Rugby announce squad to face Border Reivers for the opening game of the Magners League at Neatherdale on Friday evening and a sponsorship deal with Aer Arann. - 29/11/2006 12:19

Connacht Rugby announce squad to face Border Reivers for the opening game of the Magners League at Neatherdale on Friday evening and a sponsorship deal with Aer Arann.

Connacht coach Michael Bradley and his assistant Eric Elwood have named a 22-man squad for the opening game of the Magners League against Border Reivers at Netherdale on Friday evening.

A number of players, including Ireland A prop Ray Hogan, were not considered due to injury.

Connacht will hope to build on their impressive pre-season form which saw them run in twelve tries in the outings away to Narbonne and Rotherham Titans.

Coach Michael Bradley said they were hoping to hit the ground running in Scotland on Friday evening, especially as the next six games in the Magners League will be at home.

Connacht Rugby has received a timely boost ahead of the new season with Aer Arann coming on board as an associate sponsor of the side.

“We are delighted to welcome Aer Arann on board for the new season. We have watched this progressive Galway company grow over the years to become a major player in the aviation industry, very much what we are trying to do in a rugby context,” said Connacht Rugby CEO Gerry Kelly. “This is an important season for Connacht Rugby and it is heartening that such quality top-line companies have come on board to support us.” he added.

This is the first major rugby sponsorship deal for Aer Arann, which operates over 600 flights per week across 39 routes in Ireland, the UK and France.

Connacht will open their European Challenge Cup campaign when they entertain NEC Harlequins at the Sportsground on Friday, October 20th. Season tickets are on sale on www.connachtrugby.ie and at the Connacht Branch headquarters at the Sportsground, College Road, Galway.