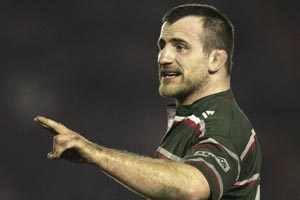 George Chuter will be at the heart of Leicester Tigers' forward drive when they clash with Cardiff Blues at a packed Welford Road on Saturday... - 10/01/2007 12:23

Good news for Leicester ahead of their Heineken Cup quarter-final as George Chuter’s eight-week ban for stamping has been reduced to three.

The Leicester hooker will be free to resume playing on March 28 and will now be available to play in their Heineken Cup quarter-final clash against Bath Rugby on 1 April in Walkers stadium.


Chuter had been found guilty of stamping on an opponent during the Powergen Cup semi-final against London Wasps on March 4.

The appeal was heard by a panel of Adam Lewis (chairman), Mike Rafter and David Hurst at the London Bloomsbury Holiday Inn.