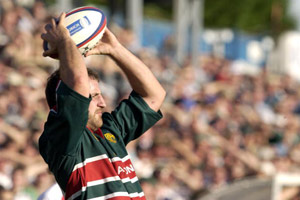 Chuter was one of three hookers to be included in England coach Andy Robinson’s initial squad and hopes that he will able to do enough in the coming weeks to make the final cut.


“This is probably going to sound a bit big-headed and I don’t mean it to, but to be honest it’s not a great surprise to have been included. When it’s a 36-man squad being announced which included three hookers, I always fancied my chances, especially after being involved during the summer and after speaking to Andy Robinson. The real test will be in a couple of weeks time when it goes down to a 30-man squad and obviously everyone will want to be in that.”

So does Chuter, one of the most consistent performers for Tigers throughout the season, believe he will be able to work his way into either the England starting line-up or a place on the bench?

“It’s difficult to say at this stage, I know it’s the old cliché but I’ve just got to keep playing at the club and hopefully the people who matter will take notice.”

Chuter is also keen to try and dispel the myth that he is a set-piece hooker, and insists there are different aspects to his game which could benefit England.

“It was something that was said. I think it came from Andy Robinson and Paddy Howard speaking, and they saw me as a set-piece hooker to challenge Steve Thompson. But I’m not a one-dimensional player and there is more to hooker than pushing the scrum and throwing at the line-out.

“I’m fairly pleased with how I’ve been playing this season. I always think there is more to be done, but I’ve been fairly happy in the tight, set-piece and round the field. This is a difficult time of the year both with the weather and the games we are playing.”

While Chuter is reasonably happy with his all-round game, he acknowledges there are aspects to work on and feels he is working hard to become a more complete player.

“My work around the field is good and it’s difficult to nail down one aspect of the game to develop. Before the season I made a conscious effort to work on the defensive side of things – making more tackles and big hits – because that was probably a side of my game I maybe didn’t focus enough attention on.

“The last four weeks I don’t feel as though I have carried the ball as well as I have and it’s just about trying to get both sides of the game up to scratch.”

While selection for the England squad is a significant achievement, Chuter has more pressing issues at hand – namely Friday evening’s crucial Heineken Cup clash at Clermont.

“Our mindset is we have to go and win. I think we will need four points minimum and we know we are not in a position to start playing games half-heartedly.

“They will approach this game with full commitment and you have to believe they will be totally up for the match.

“It was a strange old game at Welford Road. They had two scrums early on and we put a lot of pressure on them. Being away from home I think that did for them but at their place it will be a different ball game. They include a lot of seasoned internationals and have dominated packs in France so it will be a massive challenge.”