Chuter Back for Tigers 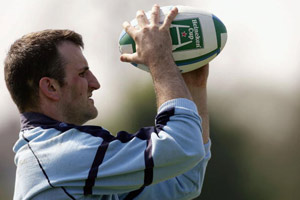 His return from suspension in place of James Buckland is the only change to the side that won at The Rec in the Guinness Premiership last week. Buckland is on the bench and Tigers head coach Pat Howard welcomes back Chuter after serving a three-week ban for stamping against Wasps in the Powergen Cup on March 4.


His ban meant Chuter missed out on playing in the RBS 6 Nations and Howard said: “I think George is a very good player and it would have been interesting if he had had a shot at the Tests. He offers something different to what’s on offer at the moment. Buckland did very well last week against the current Test hooker and it creates fantastic competition.”

Tom Varndell is missing because he is involved with England Sevens in the Hong Kong tournament this weekend and Howard was philosophical about the 20-year-old winger’s absence.

Howard said: “I would love to have Tom available and put him in this arena, but Hong Kong is an interesting environment. Next year we would say he has to come back, but it’s OK this year. Tom is an outstanding finisher and, if you’re going to get a chance to develop it has to be when you’re 20. You have to look at the bigger picture. He is going to be working with different coaches and they are coaches that I respect. I thought this was a reasonable decision.”

Howard says his side has to learn the lessons from last year’s defeat in the Heineken Cup against Toulouse at the Walkers Stadium. Tigers were outscored three tries to one and Howard said: “What separates big teams in big games is not much. A couple of cheap tries last year cost a lot.

“We don’t want to give good teams easy opportunities and miss ours.”
Howard says the outcome of last week’s game at The Rec will have little bearing on Saturday’s game and added: “We don’t have a game next week and the guys are very focused on Saturday.”

Tigers are the only team to retain the Heineken Cup in the competition’s history and Howard was in the side that triumphed against Stade Francais in Paris in 2001. He compared that side and the current line up and said: “In some ways we are better developed than we were then. Players like Andy Goode are six years older. “In other respects we are a bit younger. We’ve lost some senior players, but it balances itself out.”