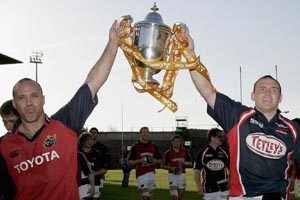 How are the Celtic teams shaping up for qualification for the 2006/2007 Heineken Cup tournament? Qualification will be determined by their performance in this season's Celtic League... - 29/11/2006 12:50

How are the Celtic teams shaping up for qualification for the 2006/2007 Heineken Cup tournament? Qualification will be determined by their performance in this season’s Celtic League…

Eight of the places in the 2006/2007 Heineken Cup tournament will be determined by the Celtic League, with three teams qualifying from both Ireland and Wales and two from Scotland. The 24th Heineken Cup team will come from Ireland, Wales, Scotland or Italy and will be decided by a play-off match.

Ireland teams are guaranteed three places in the Heineken Cup. Leinster are top of the Celtic League and Ulster and Munster are sitting in second and fourth place respectively, thereby granting them a Heineken Cup place. Connacht will have to win their final game if they are to overtake Glasgow Warriors at the bottom and have a chance of qualifying for the Heineken Cup through a play-off.

Cardiff Blues are top of the Welsh teams and look set for Heineken Cup rugby next season. Three Welsh teams are competing for the other two Heineken Cup spots. Ospreys lead the pack but Llanelli Scarlets have two games in hand. Newport Gwent Dragons got back to winning ways with a bonus point victory over Glasgow Warriors that kept up Dragons’ challenge for a Heineken Cup place next season.

Edinburgh Gunners lead the race for the Scottish Heineken Cup spots, as Border Reivers and Glasgow Warriors are separated by six points to fight for the second guaranteed place. Lying second from the bottom of the table, Glasgow Warriors have an uphill battle to secure qualification for next season’s Heineken Cup.