Cardiff bracing itself for Irish invasion 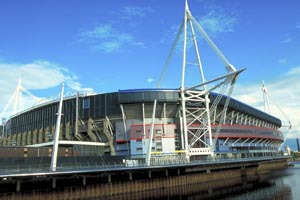 after Leinster and Munster both won their Heineken Cup quarter-finals and will now face each other in the semi-finals on 23 April.

It means that for the first time since 2002 an Irish team will figure in the Heineken Cup final, which will be held at the Millennium Stadium on Saturday, 20 May (kick-off 3.00pm). Munster will be hoping to make it third time lucky having lost in the 2000 and 2002 finals, while Brian O’Driscoll’s Leinster side will be seeking to reach their first final.

“We had sold 27,000 tickets for the final to the general public before the quarter-final weekend and we managed to sell a further 11,500 on Sunday alone after the four semi-finalists were known,” said Millennium Stadium chief executive Paul Sergeant.

“The two finalists will share at least 15,000 tickets so the best advice I can give anyone who wants to come to the Heineken Cup final this year is buy your ticket TODAY, because tomorrow could be too late. A lot of the sales over the weekend were from across the Irish Sea and Cardiff is now bracing itself for an invasion of Leinster or Munster fans.

“Everyone at the Millennium Stadium, and in the Welsh capital, remembers with great fondness the 2002 Heineken Cup final when Munster were pipped to the title by Leicester Tigers. We had upwards of 30,000 Munster fans in south Wales that weekend and all the indications are we can expect the same next month regardless of which teams makes it through “The crowd of 74,600 from that 2002 final is still the highest attendance we have had at the Millennium Stadium – more than for the
1999 Rugby World Cup final, any of our FA Cup finals and even greater than last season’s Grand Slam showdown with Ireland. With either Biarritz or Bath to join the party, it promises to be another magnificent weekend with a carnival style spirit throughout the week in the Welsh capital.”
It will be a busy weekend for Sergeant and his team at the Millennium Stadium as the day after the Heineken Cup final the ground will host the Coca-Cola League Championship play-off final.
“We will have close to 150,000 fans coming through our turnstiles over the two days and a mix of sports and cultures. It promises to be a very, very special weekend for sports fans and we will ensure there is a great welcome in both the city and at the stadium for everyone,” added Sergeant.