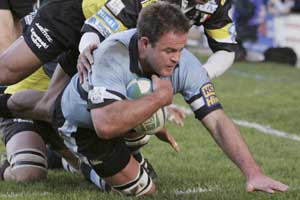 Treble champions Toulouse bid to take a significant step closer to a record fifth Heineken Cup final with one All Black singling out another All Black ace as Cardiff Blues' dangerman. - 08/04/2008 10:10

Cardiff Blues have announced that No 8 Xavier Rush will captain the team for the 2006/07 Heineken Cup season.

The 29 year old has impressed all in his first season since moving to Wales from New Zealand, with his aggressive attacking play and leadership qualities.


Rush had a very successful period as captain of the Auckland Blues winning the NPC title, Ranfurly Shield and the clinching the Super 12 title.

“Since making the move to Cardiff Blues form the Auckland Blues I have been overwhelmed by the warm welcome I have received from the supporters” said the new captain.

“I think our performances at the end of last season show what this side is capable of and I’m looking forward to leading the side out next season. We have been working hard in training and we are confident that the hard work will pay dividends in the new season.”

Commenting on the appointment outgoing captain Rhys Williams said,
“Obviously I was very honoured to be Captain of Cardiff Blues last season and I enjoyed the experience. Having spoken with the coaches we have decided the same thing: that it is better for me not have the extra weight of captaincy. Maybe I have to be more selfish and concentrate on my own game.

“I am proud that we finished as the highest placed Welsh region and as I’ve said it was a great privilege to Captain the Blues.”