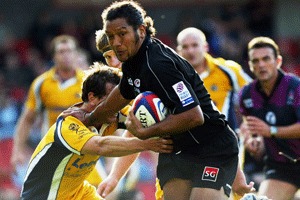 
Little has been released from his contract with Saracens immediately in order to beat the player registration deadline in Italy which will allow him to play for Calvisano this season when he has recovered from injury.

The Fijian fly half’s appearances were restricted this season because of injury and a ban which ruled him out for the early part of the seasons. He was banned for 11 weeks in September and then suffered a broken arm in January in a Saracens A team game.

Little joined Saracens in 2002 after spells with Pontypridd, Dax and previous Heineken Cup champions Sale Sharks and made 51 appearances for the men in Black during that time.

“We’d like to thank Nicky for his time with the club and his efforts over the past three years. Injuries and the ban meant he was unable to feature in the side as much as we would have liked, but he has decided to accept the offer from Calvisano and has already joined up with the club. We wish him every success in the future,” said Saracens head coach Mike Ford.

Domolailai arrives suddenly as a result of another player leaving. Lock Johan Ackermann returned to his native South Africa, where a family illness has resulted in him not returning to Italy.

Both players played for Fiji in their snowbound match against the Italians last November, which Italy won 23-8.