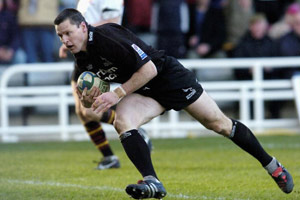 Newcastle Falcons fullback Matthew Burke will miss the rest of the season after sustaining a knee injury in Sunday's Guinness Premiership defeat to Bath. - 24/10/2007 09:14

Newcastle Falcons fullback Matthew Burke insists his side will have to hold its nerve against one of the top outfits in England on Sunday, as London Irish stand between them and a place in the European Challenge Cup final…

The Falcons host the Exiles in a 12.35pm kick-off at Kingston Park, and with both sides having beaten the other by three points already this season, the Aussie veteran is fully expecting another bruising and close encounter.


“They’re a difficult team to attack against because they fly up in defence,” said Burke, who has scored two of the Falcons 46 tries in Europe this season in his five starts.

“Both times we’ve played them this year there has only been a few points in it, one was a high scoring game up here that we lost and then the rematch was 9-6 to us down in Reading back in February.”

Assessing an Irish side riding high in the top echelons of the English Premiership, the man who turned 33 last month said: “They’re playing some good football and going about their business with a lot of confidence, but we too can take away a lot from the way we played in beating Sale Sharks last weekend as we prepare for Sunday.

“Such is the strength of the Premiership that the 11th placed team beat the top side here only a few days ago, and I’m sure this will be another well-contested game.”

The winner of Sunday’s semi-final will meet either Worcester or Gloucester in the final on the weekend of May 20/21, with the victor that day clinching a coveted Heineken Cup place.

“Sunday represents a different competition for us and a new challenge, but it’s a big knock-out game with a lot at stake,” said the Aussie World Cup winner.

“We only leaked a couple of tries against Sale, but there were a few in-roads made in to our defence which were slightly alarming and have been addressed this week.

“That’s the way we play the game though, and we just have to make sure we take our chances and score more points than the opposition.

“With two attacking teams up against each other, I’m sure the supporters are in for a good afternoon’s entertainment whatever the outcome may be.”

Tickets are still available for all areas of the stadium by calling 0871 226 6060, or popping in to Kingston Park during office hours and on the day.