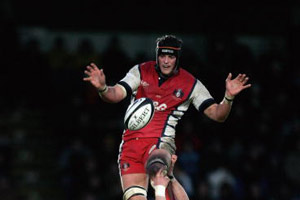 “It’s a great opportunity for us to finish the season off really well,” he said.

” We’ve been developing our game and now we have a final ahead of us with a good opportunity to get some silverware. It would great to win it and finish the season on a high and roll on to next season feeling good about ourselves.

“I’ve been a rugby player for 9 years and I’ve won nothing, so a winners medal would be fantastic. I’ve been to a couple of quarter finals, a couple of semi finals, and a couple of finals but coming second doesn’t hold any value.


“We’ve had a week’s more preperation because they had the Premiership semi final. We could be on a big backlash because of what happened to them at Leicester, and they’ll be wanting to take their revenge out on us.

And Brown knows that Irish’s fast paced attacking approach could cause them problems in a cup-final atmosphere.

“They’ve changed their game quite a bit since we played them last, they seem to thrive on turnovers and score lots of tries. We’ve added some new faces and, I think, added quite a bit to our game as well.

“Casey and Kennedy are good operators in the second row but I think Jonathan Pendlebury and Adam Eustace can help me deal with them. Jon’s got a lot of energy about his game and it does rub off on the people around you. I think he’s fully capable of delievering what we want.