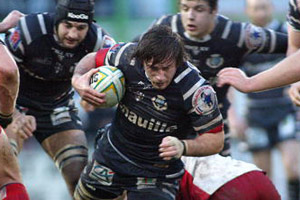 Brive will find themselves up against some familiar faces when the 1997 Heineken Cup champions clash with Gloucester Rugby at Kingsholm on Saturday... - 29/11/2006 12:20

– and Brive captain Jerôme Bonvoisin is particularly wary of the French players in the Gloucester squad.

“We know that Gloucester are going to be formidable opponents,” he said. “They have a few French players, Olivier Azam and Patrice Collazo in particular, and they are very high quality players. When they decide to go and play in the competitive arena of the Premiership they chose to go to Gloucester so that speaks volumes about the quality of the team.

“They have a lot of international players in the side and have a very deep squad while we have had a lot of trouble with away games this season. It’s true that in France it is very important to win games at home so the teams we have visited were not letting anything go at all.

“That said, we have won a lot of losing bonus points so the games have been pretty tight and, hopefully, we can cross that line at the weekend.

“Although English teams maybe attach less importance to winning home games, as this is a knock-out match I don’t expect Gloucester to give us any leeway at all if they can help it.

“The games against English teams are different to those against French sides. The teams tend to be a lot more physical, it’s a real combat sport and you can’t go into it half-heartedly. I think Gloucester are a stronger side than Newcastle, who beat us in our double-header in the Pool stages, so we are preparing ourselves for a real battle.

“The big worry for us is the kicking game. In Ludovic Mercier, Gloucester have a very reliable kicker, both for positional kicking and goal-kicking. Over the last few weeks, our success rate has dropped to less than 35% and we know that Mercier will exploit any opportunity for points.

“We know how important kicking will be in this game and it is something that our kicker has been working on very hard. It is also important for him to know that the whole team is behind him, as it may well end up being his performance which gets us through to the semi-finals.”