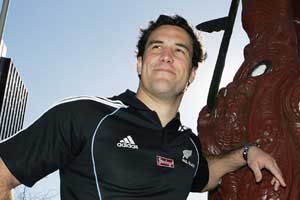 Bristol Rugby Club announced the signing of the New Zealand All Black fly half, David Hill.

Hill is a current All Black squad member who played against Ireland in the recent Test series.

Hill’s first black jersey back came in 2001 on the All Blacks’ tour of Ireland, Scotland and Argentina.

“This is a significant signing for Bristol and we are looking forward to David joining us on November 1st following the conclusion of the New Zealand NPC competition.”

“He is an experienced, well performed player who has the ability to play both Fly Half and Inside Centre.”

“We have been closely following David Hill over the last eighteen months and have been impressed with his progress, in particular his leadership in the pivotal Fly Half position, his accurate goal kicking, flair and versatility.”

“Having spoken to David at length, we believe that his attitude and character will be a real asset to the Squad. At only 27 years of age, he is at his prime and will be integral to the continued development of Bristol Rugby.”