Blues To Struggle On Without Robinson 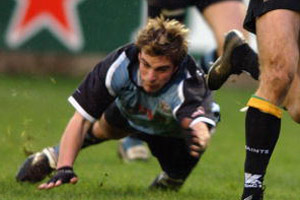 Robinson is still nursing a shoulder injury he picked up scoring a try against the Dragons over the Christmas period which forced him to miss the home game with Perpignan last weekend.

And with Samoan international Roger Warren picking up a wrist injury, it means the Blues will go into their ‘must-win’ clash with the English side with only one recognised goal-kicker in Nick Macleod.

“We’ve been keeping an eye on Leeds since we played them in the first round. They have a lot of good players and it was only a question of time before they improved,” said Young.

“We think we can step up again in our level of performance against Leeds. I don’t think they are as strong as Perpignan, but we know they are going to be a very difficult and different proposition on their own patch.

“There is still plenty for us to play for. It was a very disappointed dressing room after the game against Perpignan.

“I’m not going to make any excuses for what happened – we were just beaten by the better team on the day. They completely frustrated us.”