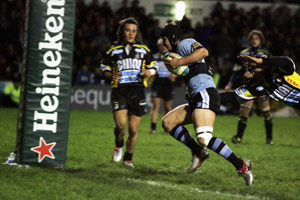 Supporters are encouraged to get their tickets as early as possible as tickets for the last home match were sold out one hour before kick off.
Supporters buying in advance can also have their tickets posted out to them and avoid having to collect tickets as in the Scarlets match

Having broken the Celtic League record with 12, 436 people attending a match the Blues will also hope to have a large crowd for the game against Edinburgh on Friday 27 January.

“The Cardiff Blues ticket office has been extremely busy this season already and our ticketing system has been working very efficiently. We have been very innovative this season with our ticketing policy with promotions in local papers and radio and we have also introduced the Heineken Cup pass and Student promotion offering a free pint to students when they buy a student ticket to any of our matches.” Said Gwydion Griffiths, Marketing and Media Officer.

“The players and management would like to thank all the Arms Park faithful and also some of our newly acquired fans this season for all their support. It’s great to see some of the supporters that have lapsed over the years coming back and it really lifts the side when we have such support. We saw the effect the Perpignan fans had on their side out in France so let’s hope our fans are equally passionate and vocal in their support in our match”. Said David Young, Director of Coaching.

Tickets are available through the ticket office on 029 2030 2030 or buying online at www.cardiffblues.com