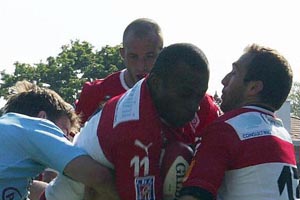 Biarritz Olympique captain Thomas Lievremont took a big step towards proving his fitness for the Heineken Cup final, making a much-awaited return to action against Bayonne.

Biarritz Olympique, unlike their Irish counterparts, were in a position to field their strongest team. The home team had run up a 34-0 lead by half-time, through two tries by Philip Bidabé, one by Sireli Bobo, and a penalty try, all converted by Dimitri Yachvili who added two penalties.

Bobo added his second after the break, and there were tries for Imanol Harinordoquy and Thierry Dusautoir as well – Yachvili failed only to convert Dusautoir’s kick.

Biarritz Olympique will hope to avoid injuries and continue this run of victories in the Top 14 ahead of the Heineken Cup final against Munster.