Biarritz in sizzling form for the final 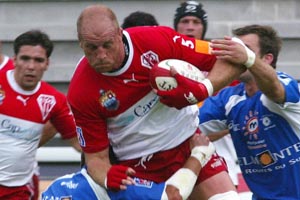 Biarritz Olympique blitzed Montpellier in their final Top 14 match before facing Munster in the sell-out 11th Heineken Cup final at the Millennium Stadium on Saturday. - 29/11/2006 12:38

Biarritz Olympique blitzed Montpellier in their final Top 14 match before facing Munster in the sell-out 11th Heineken Cup final at the Millennium Stadium on Saturday.

Biarritz then headed for a secluded camp at Cassin to hone their last-minute preparations for the biggest day in the club’s history as they contest for European club rugby’s ultimate prize for the first time.

Eight tries, including a hat-trick from Fijian wing sensation Sereli Bobo, swept defending French champions Biarritz to their 18th Top 14 win of the season and top spot in the Championship as they stay on course for the European and domestic double.

“The group of players we had for the Montpellier game is more or less the group we have in mind for the Heineken Cup final,” said contented coach Patrice Lagisquet after a 57-7 romp in which rested prop Petru Balan was the notable absentee.

Munster, appearing in their third final in seven years, had a full-blown squad session on Friday and will regroup tomorrow (Tuesday) as they bid to lift the coveted silverware for the first time.

And it is the Munster line-out – and Paul O’Connell’s aerial supremacy in particular – that Biarritz fear most, star back row forward Imanol Harinordoquy declaring: “The Heineken Cup will be won and lost at the line-out and we will be doing a lot of work on that this week, including video sessions.

“Our line-out was not perfect against Montpellier but we did not try all of our options and combinations as we did not want to give anything away to Munster.”

Hooker Benoit August added: “We tried out a few things with Munster in mind and it was probably a good thing they did not all work out. That will enable us to stay focused and sort out the details in training this week before we fly to Cardiff on Wednesday.”