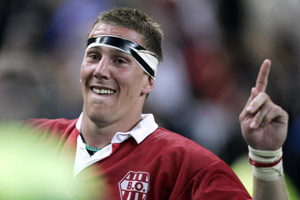 Biarritz Olympique will make the short trip across the border into Spain to play their quarter-final against Sale Sharks at Estadio Anoeta in San Sebastian with captain Thomas Lievremont hoping for a repeat experience... - 29/11/2006 12:47

“It is massively important for us to be playing this game in Anoeta,” said the current French No 8. “Last year we knew we were participating in an historical event and that the game was very important for Biarritz and the Basque people.

“But we had no idea of how big and fantastic an event it was going to be. The atmosphere was magnificent and we are really looking forward to experiencing that again. I know that Munster are pretty exceptional in terms of their travelling support, but Sale are going to bring 2,000 fans and that is great.

“Of course that will enable more Basque supporters into the game and even more of the crowd will be behind us than last year!

“But we don’t really know Sale as a side. We are certainly aware of their reputation and their current success in the Premiership, which has a lot of high-quality sides in it, so we know this match is going to be very difficult to win.

“They have a lot of quality players, several of whom have just come back from international duty and they are going to be coming here looking for victory.

“As far as Philippe Saint-André is concerned, we know that a Frenchman at the helm may change things slightly. He knows the Top 14 and all the clubs in it, so I’m sure he will be able to give his team a far better insight into Biarritz than we can have in his team.

“Maybe in this way it is an advantage for Sale to have a French coach but, having said that, at this high level of competition there are no easy games and no weak teams so I certainly wouldn’t say that there is another team that I would rather face than Sale.

“And we have been pretty lucky recently in terms of injuries. Damien Traille is back with the team and had a very successful 6 Nations so we are hoping to have a full squad.

“It is great to be coming back into European rugby off the back of a successful 6 Nations. France’s success has given us a lot of confidence going into the Heineken Cup, but we have to be careful as too much confidence could so easily lead us to a fall.”