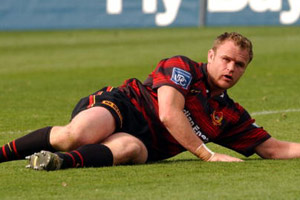 Robertson and Lomu played together for New Zealand in the Test arena but when they clash in the big Pool 2 showdown it will be to keep their respective hopes of Heineken Cup glory alive.

“The game against Cardiff is very important to both teams,” said No 8 Robertson. “Perpignan desperately want a home quarter-final.

“It’s something that we have never achieved in the history of the club and this year we have a great opportunity to try and manage to do that.”

Lomu, the most celebrated No 11 in the history of the game, featured in both Heineken Cup matches against Italian champions Rugby Calvisano but Perpignan could provide a more searching examination of his progress back to full fitness.

“What can I say about Lomu?” asked Robertson. “Jonah is Jonah!

“The French guys at the club talk about him all the time, asking how he’s doing. He has an aura around him which they respect massively. It’s true that he has lost some of what he did before and he’s still coming back but he has something special about him.

“Regardless of his form, he’s a rugby legend and legends have an ability to bring out something in a team, both their own and the opposition.

“In terms of changing our preparation to deal with Jonah, although a team should never focus on a single player, Jonah is pretty exceptional.

“He has a great ability to break tackles and draw defenders and this is something you can’t ignore.

“When you have someone of his quality playing you have to be aware of how his presence can change a game and adapt to cope with this.

“Overall we are certainly looking to attack this game and look for a win. We have taken a lot from our away performance against Leeds.

“We showed a lot of solidarity and played well together as a team and, although the result was taken away from us rather unexpectedly, we have gained lots of confidence from our performance in that game.

“Having said that, it’s a new week and a new match and past performances mean nothing. We understand that this is a must win game for both teams – Cardiff maybe more so because it’s a home tie for them.

“But we must only focus on the task in hand – which is to win.”