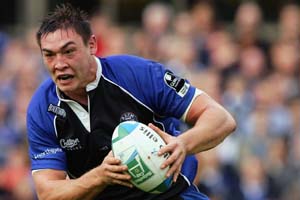 One of the top Italian sides

One of the top Italian sides, Overmach Parma, is coming to the Recreation Ground to play a pre-season friendly against Bath Rugby on Wednesday 16th August.

The match is being organised on behalf of Bath Rugby Community Foundation, a registered charity, which will benefit from all profits from the match.


This is the first time in many years that a pre-season friendly has been played at the Recreation Ground. Pre-season games are not first XV competitive fixtures, but Bath Rugby expect to put out a very strong side for this match. The Italians have qualified for the Heineken Cup, by beating Newport Gwent Dragons (another of Bath’s pre-season opponents) so should present a suitably strong challenge.

There are five matches in the club’s pre-season schedule, as well as the Middlesex 7s, which will give every member of the first squad the chance to build up his match fitness and to impress the team coaches before the competitive season begins.

Seating will be limited for the game as the East (Helphire) Stand and the Clubhouse Terraces will not be in place at this time. Tickets will go on sale on Monday 7th August to season ticket holders and on general sale from Wednesday 9th August. We expect the attendance will have to be limited to no more than 2,000, so supporters are advised to book as soon as tickets go on sale.

Steve Meehan, Bath Rugby’s backs coach, said: “There’s a lot of positive aspects about playing Overmach Parma. I don’t know how well prepared they’ll be, how far into their pre-season, but it’ll only be our second game so it should give us a good indication of where we are. We don’t get the chance to play here at the Rec before the season starts and I think it’ll be a great opportunity to put in place our plan of action without the pressure of it being a Guinness Premiership, European or Anglo-Welsh fixture.”

Parma’s Chief Executive, Tiziano Casagrande, is hugely looking forward to the game: “We were very pleased that Bath asked us to come and play; it will be a big experience for us. It may be a bit early for us in the season, and Bath are very strong, but for us it is a precious invitation and will be a big occasion.”

For more information on Bath Rugby Community Foundation and the work they do with children in our community, see the Community Pages at www.bathrugby.com