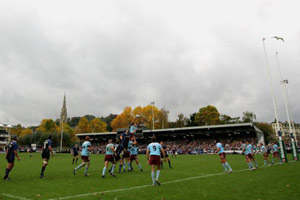 Bath Rugby have already qualified for the knock-out stages of Europe’s premier club rugby competition, but they face a Leinster side desperate to build on the best-placed runners-up lifeline that they now have following  an eight-try victory over Glasgow.


However, Ashton believes that it is imperative to produce a good performance ahead of a return to Guinness Premiership action against London Wasps last weekend, making Sunday’s game against Leinster a big one.

“There is no mission accomplished until we play a home quarter-final,” insisted the head coach. “We have qualified; that’s great, but we do want to secure a home place. That would make life that little bit easier heading into the quarter-finals.”

We you play on the European stage it is by definition a big game,” he added. “A side like Leinster with the players that they have in their XV are very strong and this is a massive challenge for us. We approach this game wanting to continue the momentum that we started to build in the second half against Bourgoin and we are also playing at home and we do not want to lose at home.”

The Lancastrian has made five changes to the side that defeated Bourgoin 22-9 last weekend. Matt Stevens, so impressive when he came on at half time, starts at tighthead as Duncan Bell is given a breather, Mears switches with Dixon, Gareth Delve comes in for Zak Feaunati, who is rested, Andy Beattie returns for Peter Short, whilst Andy Higgins starts on the wing as David Bory has business that he needs to attend to in France.

The second half performance in Bourgoin was arguably the best that Bath Rugby have played this season, and Ashton said that he was happy with aspects of the match.

“What we didn’t do at times in the first half and in the second half was repeat the errors that we made against Sale and Leeds,” he said.

“We have players who are good enough to play their way out of situations and turn back foot rugby into front foot rugby. Some of the interplay around the second receiver area amongst the forwards was very good.”