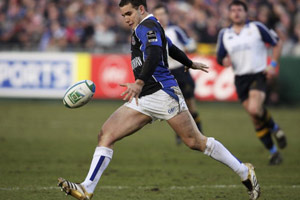 Olly Barkley has given Bath the thumbs-up as they build towards Saturday's Heineken Cup quarter-final against Leicester Tigers... - 29/11/2006 12:40

The England centre dislocated a thumb in Bath’s final Cup pool match against Leinster in January, but is back in training for the match against the Tigers at Walkers Stadium.

“Olly trained with us today and he could well be fit to play at the weekend,” said Bath coach Brian Ashton, who confirmed Test prop Matt Stevens would miss the quarter-final – and possibly the rest of the season – with his shoulder injury.

The Cup match is a repeat of last weekend’s Guinness Premiership meeting – which the Tigers won 19-12 – and Ashton is looking for a huge improvement from his men.

“I’m on record as saying what a poor display it was from both sides last weekend,” he said. “We’ll need a lot more accuracy and urgency in our play if we’re going to win this weekend.

“We hope we can pose different problems for Leicester than we managed last week. We didn’t front up anywhere – we need to be a lot more pro-active up front and a lot sharper and aggressive around the field in broken play, attack and defence. Our kicking game also needs to improve.

“The only good thing about last week’s game was Andy Goode’s tactical kicking – I’m sure both teams will improve, but I hope Goode’s kicking doesn’t get any better.

“There have been some signs of change in our style. The squad of players and management are gradually putting together a game that is a little bit more challenging than before. It’s not a one-man job – it’s a team effort.”
Ashton said Saturday’s match at Leicester City’s home was “massive” for Bath.

“You box this one off in a little compartment of its own, because it’s the Heineken Cup – it’s part of a great adventure. European rugby is fantastic and there should be more of it.  There is a real buzz about the club this week.”

Bath’s Lee Mears, who was Bath’s fourth-choice hooker when they won the Cup in 1998 – behind Mark Regan, Federico Mendez and Andy Long – said it was time for some more silverware.

“I remember the great days in Europe. I watched the games against Brive and Pau at the Rec in the buildup to the final, and I was here when the team came back with the trophy.

“It will be nice to get back to those winning days, because we haven’t won a trophy since then. We’re in a bit of a transitional period, but we’re definitely improving.

“I was watching Arsenal beating Juventus the other night, and it brought home to me just how big European competition is. The Heineken Cup is rugby’s equivalent of the Champions League – it’s the biggest competition we compete in.

We’ll have a bigger edge to our game next weekend – it’s Cup rugby, and that makes a huge difference.

“Losing stings you and we all remember the pain of losing to Llanelli Scarlets in the semi-final of the Powergen Cup recently. None of us wants another Cup defeat.”