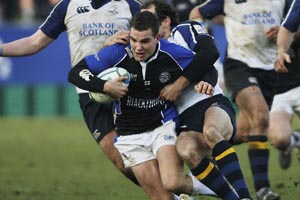 Bath Rugby and England fly-half Olly Barkley has signed a new contract with Bath Rugby which will see him remain at the club till at least the end of the 2007/08 season.

After being heavily involved with England last November during the Autumn internationals, Olly missed the recent RBS Six Nations campaign after dislocating his thumb whilst playing against Leinster in the Heineken Cup back in January.


While he will not be in contention for this weekend’s Guinness Premiership match between Bath Rugby and Leicester Tigers he could be in the mix for selection for the following week’s Heineken Cup quarter-final against the Tigers at the Walkers Stadium.

“I am aiming for a comeback against Leicester in the Heineken Cup. It is not that often that you get to be involved in a Heineken Cup quarter-final. However I want to make sure that I am 100% fit otherwise there is no point rushing back before I am completely ready.”

Since joining Bath Rugby in 200,1 Barkley has made 18 Heineken Cup and 16 European Challenge Cup appearances scoring a total of 410 points in the European club competitions. The 24 year old who can also play at inside centre, is the clubs second highest points scorer behind Jon Callard and looks well on course to break the club record.