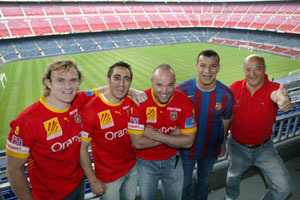 The dust is still settling on France’s 6 Nations triumph but the cream of the club teams from England, France and Ireland are set to clash in the Heineken Cup quarter-finals on 1 and 2 April en route to the final at the Millennium Stadium on Saturday, 20 May.


And Perpignan – who will face Munster in front of a capacity 48,500 Lansdowne Road crowd on 1 April – will be flying the Catalan flag in the Irish capital and hoping the European success of Barcelona will rub off on them as some of Perpignan’s stars were invited to the famous 98,000-seater stadium to catch a glimpse of Ronaldinho and Co. and to watch the Spanish giants train.

And as part of a new link-up between the two sporting clubs of the proud Catalan region, the two teams have promised to cheer each other on when it comes to their crunch games in their respective competitions.
While 1992 European Cup winners Barca have a last-eight meeting with Benfica in football’s Champions League coming up, Perpignan face a tricky trip to Ireland to face Munster in their search for European glory. And, with Frank Rijkaard’s men lending their support, skipper Bernard Goutta is hopeful of further success for both.

“It was great to be invited to such a wonderful stadium. Barcelona are a massive club and the Nou Camp is one of the most famous sporting grounds in the world with a lot of history and it really stirs the emotions just being there,” said Goutta, who was presented with his own Barca shirt, complete with his name and famous No. 7 on the back.

“Perpignan is proud of its roots and its heritage and proud to be Catalan and to think a club like Barca are behind us and supporting us is incredible – hopefully we can both be winners together.”

With the quarter-final with Declan Kidney’s Munster side fast approaching, England international prop Perry Freshwater admitted he couldn’t think of better preparation for the big game than a visit to one of the world’s best – and biggest – sporting venues.

And with the whole of Catalonia eagerly awaiting the Dublin showdown, Freshwater said: “We know Lansdowne Road is an impressive place but this is another ball game altogether – quite literally.

“Munster is going to be a huge game for us at a big ground so it’s good to get some solid preparation and what better place to come than the Nou Camp.

“We had quite a big support in the game at the Blues in Cardiff and although we might be outnumbered in Dublin, I’m sure our fans will be there and making a lot of noise.”

Unfortunately, Barca face bitter rivals Real Madrid in the “Il Classico” derby the same day as Perpignan travel to Ireland so won’t be in Dublin to cheer on their Catalan cousins.

But a survivor from their last Heineken Cup final appearance in 2003, Manny Edmonds, said: “I’m told they have the small matter of a game against Madrid on the same day but hopefully they’ll be thinking of us after the game and have a look for our result. Fingers crossed Catalonia will have two winners.”

Having taken in the impressive trophy room and looked out onto the vast arena, New Zealander Scott Robertson was so impressed with the place he’s now got his eyes on returning to sample the big match atmosphere.

He said: “The history of this place is just incredible and to have a connection through our Catalan roots is something special.

“Barcelona have blood and gold on their shirts and their crest just like our jerseys and there are people who travel from Spain to watch us. We’re aware we’re are part of the Catalan region and we get to show our pride by playing some good rugby.

“I’d love to come back to watch a game, the atmosphere at a place this size must be something else – plus I’d like to try and swap shirts with Ronaldinho.”

But Robertson wasn’t so sure about the Brazilian trickster trying his hand at the 15-man game. He said: “Perhaps he can watch us play but I’m not too sure how good he’d be if he wanted a game. He might be all right kicking for touch but then again I don’t think I’d last long if I tried out for Barcelona.”

And when asked who is most like soccer’s favourite showboater, Freshwater insisted: “I’d like to think I’ve got a few tricks up my sleeves – I reckon the only difference is the hairstyle!”