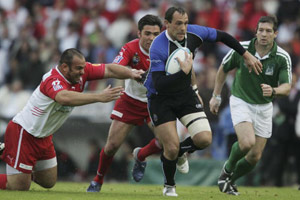 Despite twice opening up the otherwise tough as teak Biarritz defence in the second half they failed on both occasions to convert the chances into points. In the end, that was the difference between an 18-9 defeat and possible victory.

“I’m bitterly disappointed that we didn’t convert some of our chances. If we could have taken just one of those chances and turned it into a try it would have been very interesting,” admitted Ashton.

In the end, the game just drifted Biarritz’s way and I’m angry we didn’t make something of those two incursions we made into their 22. We contributed to our own downfall.

“We put ourselves under pressure in the first-half by giving away six or seven penalties. Then, at the start of the second half, we gave away two more penalties to let them get away to 15-6.

“You have got to play before 50 minutes are up if you are going to win big games. I guess the harsh reality is that we aren’t good enough just yet to win games like this.”

Bath skipper Steve Borthwick was full of praise for the effort put in by his players and agreed with Ashton’s verdict on where his team is at the moment.

“We have got to learn from this and come back and be more clinical in big games in the future,” said Borthwick. “This season’s effort in the Heineken Cup is something we can all be immensely proud of at the club and the experience should help us to move forward.”